A man is known by the company he keeps. Lawrence Larry the Liquidator Garfield is known for the companies he gets rid of. nDanny DeVito hilariously deals, connives, wheedles and cajoles as Wall Street buccaneer Larry in this high-yield comedy directed by Norman Jewison (Moonstruck) and based on the hit off-Broadway play. Larry’s never meta debt-free corporation he didn’t want to devour but he may think twice about New England Wire and Cable. Its ramrodlike patriarch (Gregory Peck) has been a fighter all of his long life. And to arm against takeover , he’s hired a lawyer (Penelope Ann Miller) whose style and cunning rival Larry’s. Is anything negotiable? Can anyone be seduced by Other People’s money? Your time invested will be amply rewarded. 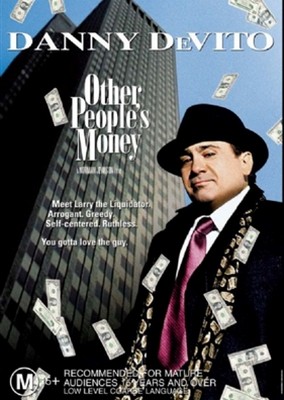