The Simpsons: Backstage Pass features four fantastic comical episodes and also includes bonus footage of Otto’s Finest Moments.A Tale Of Two SpringfieldsInfuriated by a new area code in Springfield, Homer goes on a mission to divide the town in two. As designated mayor of West Springfield, Homer wages war on the East. However, when ‘The Who’ is scheduled to play East Springfield, Homer takes it upon himself to lead the band to his side of town.HomerpaloozaWorried he is out of touch with the times, Homer purchases tickets to the Hullabalooza music festival. Although he attempts to blend in, he is rejected by the Gen X crowd. After a freak accident however, Homer ends up touring with the bands.Homer’s Barbershop QuartetHomer recalls his glory days of the mid-1980’s when he was the leader of a phenomenal, chart-topping singing group called ‘The Be Sharps’. The band’s meteoric success is short lived, however, and Homer is taught a valuable lesson about the importance of family life and the fickleness of a once-adoring public.The Otto ShowAfter attending a Spinal Tap concert, Bart has dreams of becoming a heavy metal rocker. As an encouragement, Homer and Marge buy a guitar for Bart. Otto demonstrates his ability on Bart’s guitar, causing the school bus to run late. Upon losing his job, Otto is forced to move in with the Simpsons.Features special guest appearances by Spinal Tap members, Christopher Guest, Michael McKean, Harry Shearer, Sonic Youth, Cypress Hill, Smashing Pumpkins, Peter Frampton, Pete Townshend, Roger Daltrey, John Entwistle, George Harrison and David Crosby. 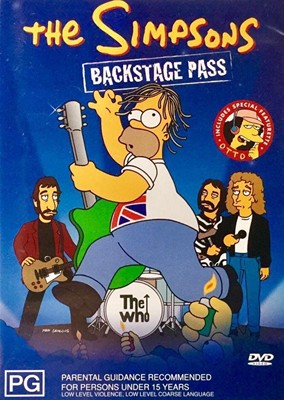