Elementary, My Dear Simpson! Contains four classic episodes including: Black Widower (Season 3): Sideshow Bob is released from prison and proposes to Marges sister Selma. Everyone is happy except Bart who must put the clues together in time to reveal that Bob indeed plans to murder his bride to be. Cape Feare (Season 5): An unknown letter writer threatens Bart and turns out to be none other than Sideshow Bob. Released from prison yet again Bob makes Barts life miserable and then finally attempts to murder his ten year old nemesis with a machete. Who shot Mr. Burns? Part 1 (Season 6): In this season ending cliffhanger Mr. Burns threatens to block out the sun then is shot by an unknown assailant. Unfortunately Burns is so hated there are far too many suspects. Who shot Mr. Burns? Part 2 (Season 7): In this season premiere episode featuring guest star Tito Puente Mr. Burns assailant is revealed. And it turns out to be the last Simpson you’d expect. 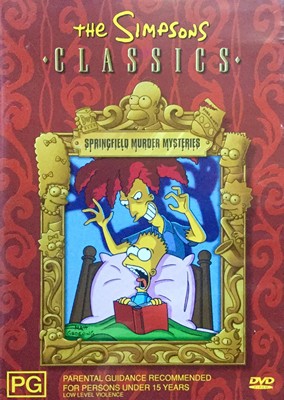