Simpsons – Kiss and Tell The Story Of Their Love

Simpsons – Kiss and Tell The Story Of Their Love (DVD, 2007) Pre-owned

NATURAL BORN KISSERS Marge and Homer put the ooh la la back into their relationship when they rekindle romance by making love in dangerous locations. Meanwhile Bart and Lisa make their own discoveries including the lost ending to Casablanca using a metal detector. LARGE MARGE Marge mistakenly thinks Homer is eyeing other women. In an effort to uplift her appeal she decides to get plastic surgery to look younger. But the surgery goes awry when Marge receives breast implants that were meant for a younger patient. Meanwhile Bart and Milhouse catch an episode of Batman where Batman and Robin battle Clown Man who happens to look a lot like Krusty. Guest stars Adam West Burt Ward Susan Yezzi Jan Hooks and the Baha Men. THREE GAYS OF THE CONDO After yet another Homer and Marge fight Homer ends up sharing a condo with two homosexuals who dont exactly think Homer is straight. THE WAY WE WEREN’T Homers confession that his first kiss wasnt with Marge
prompts his story of a summer camp romance that turns out to reveal Marge and Homer had met when they were younger. 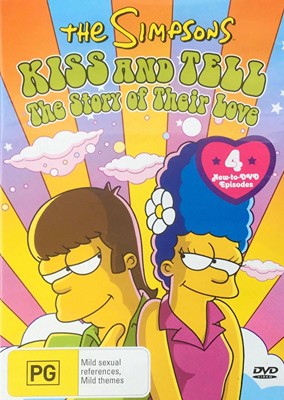 You're viewing: Simpsons – Kiss and Tell The Story Of Their Love $20.00 incl. GST
Add to cart