Treehouse Of Horror V In this annual trilogy, Homer attempts to kill his family in ‘The Shining’, Homer tries to fix a toaster and winds up altering the fabric of time itself in ‘Time and Punishment’, and Principal Skinner serves students for lunch in ‘Nightmare Cafeteria’. Treehouse Of Horror VI In this Halloween-themed anthology, advertising icons go berserk in ‘Attack of the 50 Foot Eyesores’, Groundskeeper Willie invades the children’s dreams in ‘Nightmare on Evergreen Terrace’, and Homer enters a E-D world of computer animation in ‘Homer 3’. Treehouse Of Horror VII This Simpson showcase features a terrifying look at Bart’s evil twin in ‘The Thing and I’, Lisa creating a miniature world in ‘The Genesis Tub’ and aliens stealing the identities of Bill Clinton and Bob Dole, in ‘Mr. Kang Goes To Washington’. Treehouse Of Horror XII In ‘Hex and the City’ a gypsy curses Homer, bringing misery to everyone he loves. In ‘House of Whacks’, a computer (Pierce Brosnan) takes over the Simpson’s house and attempts to kill Homer for Marge’s love. And in ‘Wiz Kids’, Bart and Lisa are students at a school for wizards, where they foil the evil Lord Montymort.Special guest appearance by: Pierce Brosnan 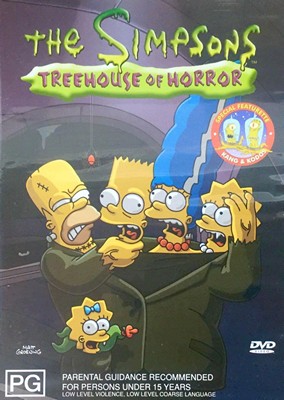