Hollywood superstar Bruce Willis (Armageddon, The Siege) brings a powerful presence to an edge-of-your-seat supernatural thriller that earned six Academy Award nominations. Dr. Malcolm Crowe (Willis) is a distinguished child psychologist haunted by the painful memory of a disturbed young patient he was unable to help. So when he meets Cole Sear (Haley Joel Osment -Forrest Gump)… a frightened, confused eight-year-old with a similar condition…Dr. Crowe seeks to redeem himself by doing everything he can. Nonetheless, Malcolm is unprepared to learn the truth of what haunts Cole: terrifying, unwanted visits from the restless inhabitants of the spirit world! With a riveting intensity you’ll find thoroughly chilling and utterly unforgettable, the discovery of Cole’s incredible sixth sense leads them both to mysterious and unforseeable circumstances! 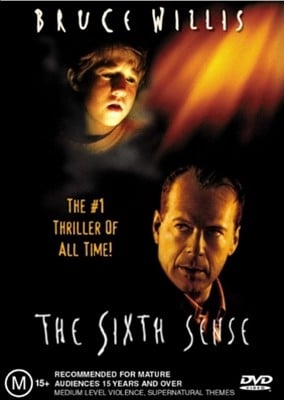