The Devils Ride – The Brotherhood

Step inside the thrilling world of motorcycle clubs with the members of San Diego’s Laffing Devils. Meet the clubs president Gipsy, who must balance the Laffing Devils growing ranks with pressure from older members to maintain the status quo. An ex-Marine who served in Iraq, Gipsy credits the club for helping him deal with the emotional scars of war. Then there’s Gipsys second-in-command, Billy the Kid, who waits in the wings wondering if he’ll have the chance to lead the Laffing Devils, while younger member Snubz breaks all the biker stereotypes with his degree in finance and full time corporate job.As well as pressure from local police and the need for the club to bring in funds, the Laffing Devils must also deal with a new rival club known as Sinister Mob Syndicate, or Sin Mob for short. Having splintered off from the Laffing Devils, Sin Mob appears to be getting stronger and stronger as the days go by. San Diego may be big… but is it big enough for both motorcycle clubs, or will their rivalry be forced to boiling point? 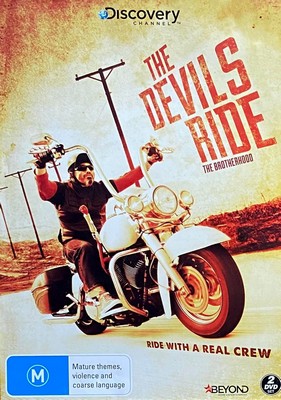 You're viewing: The Devils Ride – The Brotherhood $10.00 incl. GST
Add to cart