The story begins in Aurora, Texas around 1897 Alain (Carol Bagdasarian), the town’s pretty school teacher, has just inherited her father’s newspaper and she is determined to make it a success. Turning it into a success, however, is especially difficult in Aurora, as the town is one of those typical places where there is seldom any excitement and always more gossip than news. But all of this is destined to change as a startling account is revealed of a tiny visitor from someplace among the stars. A widow (Dottie West), living alone on the outskirts of town, is first to see the alien (Mickey Hats) and she quickly reports the encounter as seeing a “stranger” lurking about. The sheriff agrees to “keep his eyes open” for suspicious characters, but isn’t alarmed by the widow’s story. In the meantime, Sue Beth (Mindy Smith), a little girl from Aurora, discovers a space craft along a river bed where she’s been walking. Awed by the craft and the sight of it’s alien pilot, she watches as the ship ascends and disappears. She finds a large diamond like jewel, apparently left behind by the alien in the strange flying machine. In town, she shares the entire incident with her teacher, Alain, who immediately determines the tale, true or false, as a tremendous story for her newspaper. 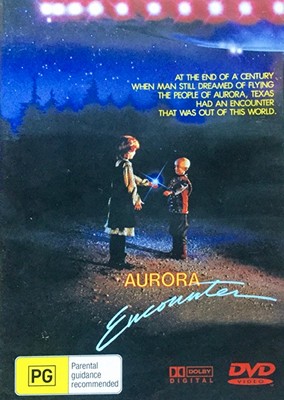