Blockbuster filmmaker Jon Favreau directs Daniel Craig and Harrison Ford in an event film for summer 2011 that crosses the classic Western with the alien-invasion movie in a blazingly original way: Cowboys & Aliens. Joined by an arsenal of top moviemakers Steven Spielberg, Ron Howard, Brian Grazer, Alex Kurtzman and Roberto Orci, he brings an all-new action thriller that will take audiences into the Old West, where a lone cowboy leads an uprising against a terror from beyond our world. 1873. Arizona Territory. A stranger (Craig) with no memory of his past stumbles into the hard desert town of Absolution. The only hint to his history is a mysterious shackle that encircles one wrist. What he discovers is that the people of Absolution don’t welcome strangers, and nobody makes a move on its streets unless ordered to do so by the iron-fisted Colonel Dolarhyde (Harrson Ford). It’s a town that lives in fear. 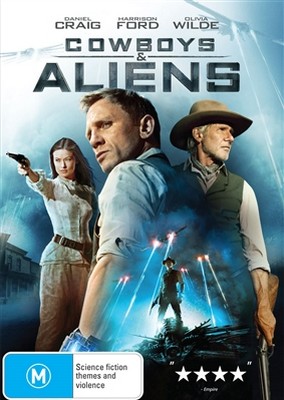 MiMs Fun July Sale!! 60% off all Comedy Titles not already on sale. Enter coupon code MIMSFUN60 at checkout to take advantage of this awesome offer! Wishing you lots of laughs! 🙂 xo Dismiss