Thomas, Jack and Wayne are the best of mates. Together they’re the Stickmen playing an on-going stake game of pub pool that sees them touring the dark under belly of the pub scene. They each live their lives the same way they play pool. Thomas is either “on” or “off”. His game can be one of two things absolutely brilliant or absolutely crap. Jack is always slick, cool and forever setting up the next shot. Wayne is well, Wayne. He bumbles his way through life, happy to be the guy who always says the wrong thing at the wrong time. During the high stakes pool tournament a weird and wonderful collection of players stand in their way of winning the big cash prize. Behind it all is the sinister omnipresence of Daddy, a crime lord who pulls all the strings. Against the backdrop of the tournament Thomas is at a turning point in his life. He’s lost his job, his girlfriend and the roof over his head. But as the game goes on he finds himself being pursued by the feisty Sara a girl with alot of attitude and a big secret. They’re playing the shots, covering the angles but can the Stickme3n make the big break? 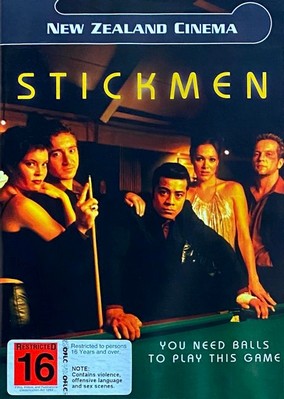